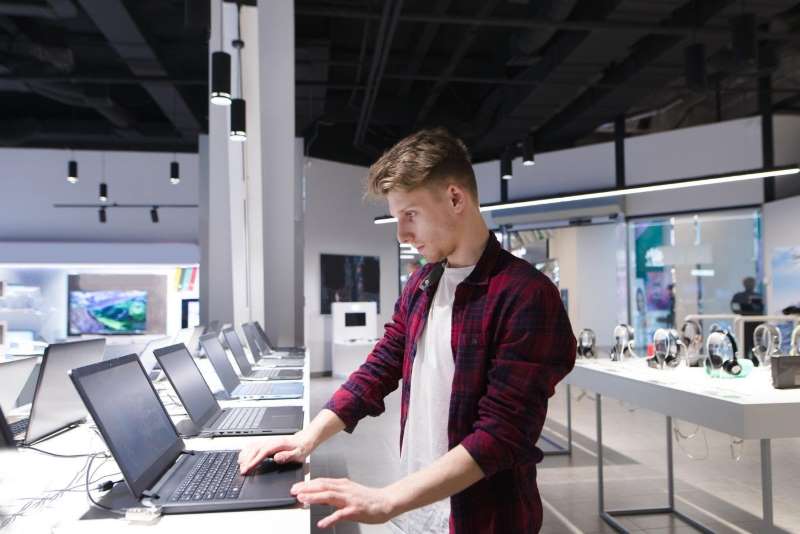 When the year 2019 ended, Lenovo reigned supreme of all computer makers, with a market share of 24.1%. Back then, the maker shipped a total of 62.97 million computer units.

Apple, by contrast, only took fourth place, with a 7% market share. The elite tech giant sold some 18.35 million units of its Mac computers.

With that said, you may be wondering which of these two brands to go with. In that case, you should compare the Lenovo ThinkPad X1 Carbon vs. MacBook Pro. These are the two primary competing units from both brands.

Don’t worry, though, as we’ll help you figure out which laptop may be best suited for your needs. Read on to find out when to go for the Lenovo ThinkPad X1 Carbon and when to opt for the MacBook Pro.

MacBook’s maker, on the other hand, is none other than Apple. Apple is an American multinational technology company headquartered in Cupertino, California. It’s the first-ever US company to be worth more than $2 trillion.

According to Lenovo.com, there are currently two supported ThinkPad X1 Carbon generations. These include Gen 7 and Gen 8. Interestingly, the discounted price for Gen 7 starts at $999.99, while it’s $949.99 for Gen 8.

With that said, let’s take a closer look at their primary specs.

The Lenovo ThinkPad X1 Carbon Gen 7 is available in 17 different configurations. As mentioned above, the discounted rate for the base model is $999.99, but its actual web price is $1,109. The top-shelf (and also most expensive) model is worth $3,839.00 (without a discount).

All Carbon Gen 7 laptops come with a 14-inch screen, with the base model featuring a Full HD display. You have the option to upgrade to Wide Quad HD (2,560 x 1,440 resolution) or Ultra HD (3840 x 2160 resolution). As you can imagine, the better the display quality, the more expensive things can get.

The base model also comes equipped with an 8th Generation Intel Core i5 processor and 8GB memory. Your upgrade options include up to 10th Gen Intel Core i7 processors and a max of 16GB memory.

As for the hard drive, the base comes with a default of 256GB of pure storage. You can upgrade this to 512GB or go full-on with a 1TB SSD drive.

The Lenovo ThinkPad X1 Carbon Gen 7 utilizes a 4-cell 80Wh/51Wh internal battery. According to the laptop maker, this gives the laptop enough juice to last for 18.3 hours.

There’s also a full suite of ports available on the Carbon Gen 7; there’s eight of them in total. These include two USB-A, two USB-C, HDMI, ethernet, mic/headphone, and a Kensington lock slot. An optional WWAN slot is available on certain models.

You have eight trims to choose from when it comes to the Lenovo ThinkPad X1 Carbon Gen 8. Like the Gen 7 models, however, all Gen 8 units also come with a 14-inch screen. You can also opt for either a WQHD or UHD display.

One of the primary differences between the Gen 7 and Gen 8 ThinkPad X1 Carbon models is the processor. The base model for Gen 8 already comes with a 10th Generation Intel Core i5 processor. Your upgrade options include a variety of 10th Gen Intel Core i7 versions.

As for the built-in memory, the base Gen 8 model comes with 8GB of RAM. It also features 256 GB of pure storage. Both are upgradable: up to 16GB for memory and 1TB for the hard drive.

The Lenovo ThinkPad X1 Carbon Gen 8 has a longer battery life than the Gen 7 ones, though. Lenovo says that it can last for up to 19.5 hours between charges. That’s a considerable 1.2-hour difference between the two generations.

The available ports on the ThinkPad X1 Carbon Gen 8 are the same as those on Gen 7. You also have the option to get a WWAN slot.

The MacBook Pro comes with two display screen options: 13-inch and the 16-inch. Both models feature the retina display. On the 13-inch version, the screen boasts a 2560 x 1600 resolution.

The price for the smaller one starts at $1,299, while the bigger one has a starting price of $2,199. There are education discounts, though, which can slash off $100 from your Apple laptop bill.

As for memory, you get 8GB of RAM for starters, which you can upgrade to 16GB. If you go with the 16GB default, you can boost its RAM power to 32GB.

The least amount of storage you can get with the 13-inch MacBook Pro is 256GB. If you have the budget, you can configure this to give you 512GB, 1TB, or even 2TB.

According to Apple, the 13-inch MacBook Pro can go up to 10 hours between charges. As you can see, that’s only a little more than half of what Lenovo can provide.

Also, note that there are only 3 external ports available with the 13-inch MacBook Pro. Two of these take the form of Thunderbolt 3 (USB-C) ports. The third one is a mic/headphone jack.

The bigger screen of the 16-inch MacBook Pro delivers a 3072 x 1920 resolution. As with the 13-inch version, it also uses retina display technology.

The base trim of the 16-inch MacBook Pro boasts a 6-core 9th-gen Intel Core i7 processor. The higher-tier model comes with an Intel Core i9 processor 8 core 9th gen. The latter configuration costs at least $2,599.

You also get 16GB of RAM with the base model of the 16-inch MacBook Pro. It also gives you a solid 512GB of pure SSD storage. The more expensive version has the same RAM, but it comes with 1 TB of SSD storage.

With the 16-inch MacBook Pro, you can opt for up to 64GB of memory. Higher storage of up to 8TB is also available.

Compared to the 13-inch MacBook Pro, the 16-inch version lasts just about an hour longer. It does have two extra Thunderbolt 3 ports, bringing the total to four.

If you factor in the discounts, Lenovo wins in terms of having a more affordable starting price. Even without the discount, its face value is still $190 less than the 13-inch MacBook Pro. So, if your priority is cost, then you may want to go with the Lenovo ThinkPad X1 Carbon.

The estimated battery life of the ThinkPad X1 Carbon also makes it better than the MacBook Pro. Even if you only go for the 18.5-hour variant, that’s still a lot longer than MacBook Pro’s 10- to 11-hour lifespan. If you’re always on the go and you need a lot of juice, go with Lenovo.

Lenovo also wins when it comes to ports, not only because there are more, but also because it’s more variated. This makes it a more ideal option for those who tend to use a lot of peripherals.

When to Go for the MacBook Pro

The MacBook Pro is the definite winner in terms of display quality. Keep in mind that its base 13-inch model already comes with a 2560 x 1600 resolution. This is much better than the Lenovo ThinkPad X1 Carbon’s Full HD display.

The display quality of Macs is also the main reason that they’re the go-to of folks in the creative sector. Graphic designers and videographers tend to prefer Macs for their work.

The MacBook Pro also ranks better when it comes to configuration options. Even if you go for just the 13-inch version, you have the option to ramp up its RAM to 32GB. The ThinkPad X1 Carbon, by contrast, is only upgradable to 16GB.

Prioritize to Determine Which Laptop Is Best for Your Needs

There you have it, your guide to comparing Lenovo ThinkPad X1 Carbon vs. MacBook Pro. As you can see, both of these laptops have their own set of pros and cons. That’s why it’s vital to make a list of your priorities so that you can figure out which one is better for your needs.

If you’re on a budget and need a battery that lasts longer between charges, go with Lenovo. If your work requires access to top-notch display resolution, then go with the MacBook Pro.

Ready for more nifty tech, lifestyle, and even health guides like this? Then be sure to check out our site’s other news and blog posts!