An aquarium can brighten up our lives with its soft glow illuminating a variety of marine creatures and fish species. Choosing which types of fish to fill the initial vacancy of a newly acquired fish tank is crucial for its aesthetic effect while being compatible with an aquarist’s preference. The Firefish Goby is an excellent choice that combines fiery colors with a unique biological form. 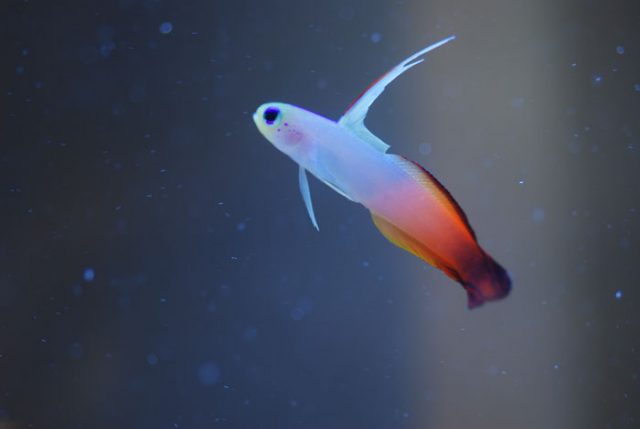 One of the most popular saltwater fishes of the aquarium industry, the Firefish Goby, is a cute little fish known for its slender body and a primary dorsal fin protruding at an angular scythe from its back. The Goby firefish goes by the scientific name of Nemateleotris Magnifica and has a maximum lifespan that could last to three years. Its name is taken from its body’s colors, which starts from the white coloring of its head and half-abdomen and suddenly transitions to a bright red-orange tail that seems like the colors of a flame.

The Firefish is also known as the Magnificent Firefish or Magnificent Dartfish due to its slender frame shaped like an ancient spear’s tip. If you want to choose other species of fish that can accompany the Firefish Goby, you can read about them and learn the proper compatibility requirements for different types of fish. Apart from being a gorgeous fish, the Firefish Goby is an inexpensive addition to your Saltwater aquarium.

Experienced aquarists and owners of the Goby Firefish states that it is a beautiful specimen combined with tons of personality. The Firefish earned its moniker as the dartfish since it has the propensity to dart or quickly swim back and forth from aquatic hardpoints to seek cover whenever it feels threatened or frightened. Aside from its mercurial mindset, the Firefish is truly a wonder, for it can spend days flitting just about your aquarium and suddenly dive into hiding.

Goby Firefish schools can be found floating above reef formations in its natural habitat, scoping, and feeding upon planktonic nutrients brought by the sea current. The Goby Firefish still attains its timid personality even in the wild, for they quickly hide into their “bolt holes” as their evolutionary method to avoid marine predators. When a hobbyist chooses the Firefish as their pet, it is essential to install rocky formations and hard coverings that the fish can use as their shelter during times of distress.

How to Care for the Firefish Goby

The Goby Firefish has found an audience in the aquarium industry as an ornamental fish best suited for saltwater assemblies. Its notable small size makes them ideal for nano reef aquariums and other miniature installations. It is recommended to have the Goby Firefish live inside large aquariums due to their natural behavior to swim to and fro from their comfort zones swiftly.

The Goby Firefish feeds on plankton during their lives in the wild. These fish species are considered omnivores, for they hunt down brine shrimp aside from feeding on zooplankton fish tank growths. The recommended Firefish food to give them should consist of meaty ingredients such as brine shrimp, Mysis shrimp, finely-processed or frozen sea foods, or vitamin-enriched formulas.

The Goby Firefish’s ideal habitat is a large aquarium that has a bottom with a minimum surface area of two squared feet. It is the standard fish tank dimension for Goby Firefish couples combined with compositions of corals, reefs, sediments, and aquatic rocks. The Firefish should also be safely enclosed within a marine container with a secured lid since most hobbyists lose their Firefish, for they jump off aquarium openings.

The best tank mates for the Goby Firefish are Shrimp Goby fish, Clownfish, or two other members of the same species. Fish that are shy and timid can also be great company for the Goby Firefish. They are known to be “dither fish” since they encourage other fish species to get out of their caves and be out in the open.

The Goby Firefish is a small, multi-colored fish species that are popular for saltwater aquarium assemblies. It is considered an omnivore and feeds on brine shrimp and natural growths of zooplankton. The Firefish is also known as the dartfish based upon their behavior of quickly swimming to cover when threatened.