Home
Automotive
: Reasons Why Beginners Should Choose It

The streetfighter motorcycles can trace its origins to the European racing era in the 1950s and 1960s. Riders chose to remove the fairings from their motorcycles to avoid expensive repairs in case of crashes. The motorcycles became less aerodynamic and displayed only the bare essentials, but they were great for showing off stunts. In the 1990s, these bare motorcycles became even more popular, which gave manufacturers the idea to create their own type of streetfighter factory-built models to cater to the growing market.

Rather than investing time and effort in building a customised motorcycle, consumers could easily purchase a branded streetfighter model with the various power outputs. In the selection of a motorbike, there are many questions you may ask. First, is the motorcycle built for the type of riding you will be doing? Second, do you feel confident and secure while riding the motorcycle? Nowadays, riding a Triumph Street Triple 660 LAMS achieves the great urban riding experience, and it is the ultimate LAMS approved motorcycle.

To increase road safety, the New Zealand Transport Agency released guidelines on the Learner Approved Motorcycle Scheme (LAMS). Through the initiative of the Safer Journeys road strategy, high-performance bikes are LAMS-prohibited. Riders on a restricted or learners license are given an approved list of suitable motorcycles that are appropriate for less experienced riders. 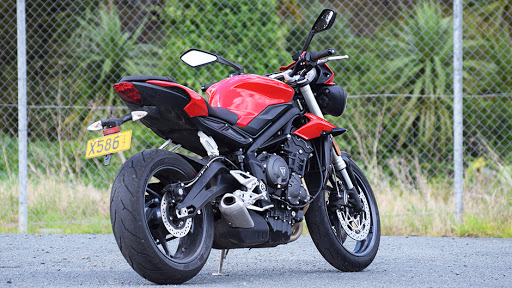 Towards the end of 2007, Triumph Motorcycles released a light, limber, and obtainable bike called the Street Triple. For a more affordable price tag, Triumph claims that the motorcycle is more responsive with a seven per cent reduction to rotational inertia while staying within the LAMS limits of 660cc. The naked or streetfighter model is a lighter and balanced bike that performs well on the track and on the street for daily use. The Triumph Street Triple features newly designed LED headlights, a new compressed exhaust, two new paint schemes, and redesigned mirrors.

According to the Ministry of Transport in New Zealand, riding a motorcycle remains to be the riskiest mode of transportation on the open road. In 2019, there were over one thousand three hundred and ninety-eight injuries involved in motorcycling. According to the statistics, a motorcyclist is twenty-one times more at risk of having an accident or dying on the road than a car driver with the same distance travelled on an open road.

Speed limits have been modified over the years to accommodate the increase in the number of vehicles on the road, but drivers must also be mindful of their own speed limit as it is a major factor in deciding whether one will receive a small injury or survive an accident. Although most riders observe the road rules, people can make a mistake and affect you. The most common mishaps occur when drivers are careless and turn on a corner too quickly, neglect road conditions during undesirable weather, and get distracted while driving.

If you’re new to riding motorbikes, keep in mind that it should be LAMS approved for safety purposes and stand up to the test of time to get the most value for your money. If you are still unsure, go and book a test ride with the Triumph Street Triple 660 LAMS to get a feel for the bike before purchasing. Get the bike that you could take to the track on one day and ride to work comfortably on a regular commute on the next.